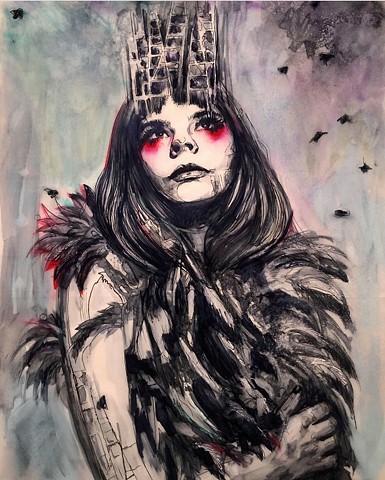 Nyahzul is a self-taught multi media artist born in Bogotá, Colombia and based in Brooklyn, NY. She has been actively creating, exhibiting, and curating for over a decade across the U.S. in Los Angeles, Orlando, Detroit, New York City, Las Vegas and in her hometown of Bogotá. Her complex personal works evoke magical and romantic narratives that explore the many facets of femininity, darkness and light within, and finding unity between the two. She was the Associate Director of Rabbithole Studios in Brooklyn from 2011-2016, curating over 100 shows in the last year of the gallery’s run. She co-founded Fakelore and worked as Art Director in the award winning stop-motion animation “Pecos Bill” and also on the second installment of the fables and legends series “Madremonte”. In 2016 she begun her pursuit of becoming a tattoo artist at Last Rites Tattoo in Manhattan, where she apprenticed under the legendary Paul Booth. She is currently Manager to Tattoo Master Yomico Moreno and continues to grow as a Tattoo Artist at Yomicoart Studio in Brooklyn, NY.